No surprises in Cyprus

As I said, in my previous post on the matter, Cyprus had two choices: either refuse to bail-in its banks, which implied directly to be ejected form the eurozone, either to balance better who would pay. Therefore Cyprus’ final deal is probably close to a good one.

With reason, Cyprus’s policymakers finally chose to go back to the bail-in option which imply deposit contribution. But this times, several features of the agreement make the deal different – and way better:

Someone has to pay for the crisis

What I find very revealing with the deal is more the people’s reaction. Cypriots go in the streets refusing a deal which is actually one of the best their governments could find out. What were you expecting? It’s like everyone wants the crisis to be over, but no one wants to have someone pay for it.

Put it simple, in Cyprus you have a black hole of 10billion euros, mostly from restructured greek sovereign bonds. This means 10 billions euros are missing in the cypriot banking system. It’s mathematics! Someone has to bring the numbers to balance the spreadsheet! 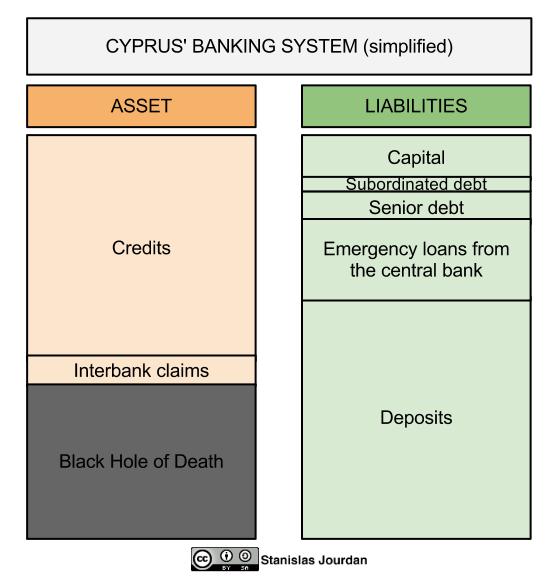 Now of course there are many different ways to resolve the equation.

One could choose to get more a greek-style bailout from the UE, but obviously this will only pile up more debt without any concrete results except more austerity for everyone in order to pay back the new debt.

Another solution would be to exit the euro and this way be able to print money to fill in the gap – something impossible within the eurozone because of the European Treaty. This is something I have always stated would be the best thing to do, especially if this is implemented as a quantitative easing for the people. Unfortunately though, most people tend to reject this option, for irrational reasons such as the one of inflation. Another reason is the great uncertainty that comes with a euro exit.

So if you reject both austerity and printing money, what are the remaining options? At least the current plan takes a large part of the money ‘where it is’ without creating so more public debt.

Where the money is? In the case of Cyprus, mostly as deposits in the banks.

What are deposits? Deposits, contrary to what most people think, is nothing like a property. A deposit is merely an IOU form the bank to the depositors. “I promise i’ll pay back the money” says the banker, “and meanwhile you money is in my hands i’ll pay you a small fee called ‘interest’ for the service of providing me resources.”

Everything is fine in principle, but like any promise though, changes of circumstances eventually make it impossible to honor.

Because this perspective is very scary, and because markets and banking need stability and confidence, States have create “Deposit Guarantee Schemes”, which are supposed to protect all deposits below 100k euros. This basically means that deposits above 100k are not insured.

No Secret, no surprise

So I wonder… Should anyone be so surprised of what is happening in Cyprus?

Perhaps the real surprise is how badly people are informed, and lack of basic economic knowledge.