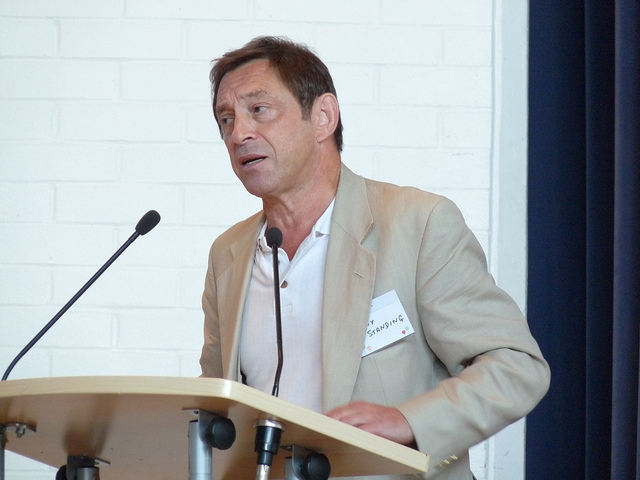 Guy Standing is Professor of Economic Security at the University of Bath and a founder member and co-president of the Basic Income Earth Network (BIEN), a non-governmental organisation that promotes a citizenship income for all. He worked at the International Labor Organization as researcher for many years and is author of “The Precariat — the new dangerous class”, published in in 2011, and “Work after Globalisation: Building Occupational Citizenship”, published in 2009.

I had the opportunity to interview Guy at the BIEN Conference in Munich last september. The interview was published on the french website Basta!. Here is the unedited transcript in english.

What’s the Precariat all about?

The precariat is a global phenomenon that I have been trying to analyse since the 1980s. When I started, I called this phenomenon the flexi-workers, but I realized there were various forms of insecurity that are growing, and I wrote a series of papers and articles at that time. Then people like Bourdieu came with the notion of precarité , which is similar, but gradually, the precariat has been sticked to some specific social groups, and then an emerging potential class, a class in the making, but not a class for itself.

What does it look like to be part of the Precariat ?

The precariat is struggling to have some control over time, over how to use time rationally and productively. This is stressful, given the uncertainty in which the precariat is forced to live and try to work.

These three groups have very different social consciousness, but increasingly they are getting conscious of sharing the sense of precariousness, the sense of not belonging to the same class as the others. They feel like these people there, the super-richs, the bureaucracy, are living a life completely different. There are on another planet !

Those in the salariat and in the elite have no idea of how much work has to be done by many in the precariat, often useless work that leads to nothing, such as queuing and form filling in the hope of gaining something. The rich can buy advice and buy services. That makes them smug and makes them lose empathy with those in the precariat.

All in all, members of the precariat are feeling very anxious, insecure, not having access to income and so on. But most of all, the precariat is growing angry!

So what shall we do?

The point is, the precariat does not have access to any state benefit except through means-testing, workfare, conditionality. And actually, all those schemes do not reach the precariat. Some do, but not many.

In these circumstances, States have two options. The first one is to go to workfare, as it has been ongoing already. In that case it will becomes increasingly utilitarian and moralistic. And sadly the consequences of this will be the rise of the far right, as we are already witnessing.

The second option is to give people basic security as a right. And of course, this is where the unconditional basic income is so relevant.

A basic income is a long-term objective, giving everybody in our rich societies a basic amount on which to survive with dignity, as a right. My view is that we should judge policies by whether or not they move us towards that long-term goal. The point is that basic security provides us all with an anchor on which to develop our potential and to act responsibly and rationally towards our relatives, neighbours, friends and colleagues. Insecure people easily lose their sense of empathy. It corrodes our character.

For the precariat, moving towards a basic income would enable them to have greater control of their time, greater bargaining strength vis-à-vis employers and the state and others, such as powerful commercial agencies, or even husbands. Unless we have a movement towards giving people basic security as a right, we are going to see that anger growing. The threat is really growing at this stage.

The last chapter of your book is actually an appeal for policians to wake up and consider the alternative. Do you think this appeal will be heard before things gets worse?

I don’t think there will be a wise politician showing up and bring the alternative on the table. But the anger has to be channeled. The young educated activists will probably give the lead, with an ecological orientation, with a sense of restoring the commons, recapturing time. There is going to be a groundswell of people who realize that we have to create a movement, have an active civil society to make the politicians address the problem. The anger can be useful if it forces the politicians to realize that they must take the relevant decisions.

Is it happening already?

The ‘occupy’ movement in the States and the spanish movement are just the beginning. The way I interpret these movements – and I was invited to speak to a number of Occupy movements – is that 2011 was a great year wakening, a year in which people have become primitive rebels. They now know what they are against, but don’t know yet what they are for. But this energy as led an increasing number of people to recognize themselves as part of the precariat.

That convergence will take time. However, the Occupy Movement, the Indignados, the Den Plirono movement in Greece and other movements are beginning to demonstrate to more and more people in the precariat that they have more in common than they thought. This step of recognition has been really happening, but now we need to move forward, keep the groups active, and work together, and most of all, formulate specific demands.

If the precariat rises up, isn’t there a risk that others groups stand against it (for instance: workers, pensioners) ?

In your opening speech at the BIEN conference, you said that basic income supporters needed to “double their efforts”. But you did not provide the handbook for that! What should be achieved?

Basic income is a matter of achieving a trend, a change of direction. I mean, i believe in the end, that everyone should get a basic income, but the first thing we have to do is to reverse the current trend towards workfare, coercion, demonization of people in precarity, demonization of the youth, the prejudice according to which they are lazy and so on. This sort of direction that the political establishment has been moving towards has been very convenient as a reason for cracking down on state benefits and downsizing social welfare. We must reverse it, and I think the basic income supporters and others groups related to the precariat can help a lot.

Are you optimistic then?

I have been invited to over 100 meetings this year, in 24 different countries this year. And everywhere, every time, I could listen and feel that energy coming back. So yes, I feel optimistic that suddenly, people on the left, the Greens, people worried about the commons, their children and relatives – those being pushed into the precariat. I think more and more people are feeling that there must be an alternative to this neoliberalism, utilitarianism, to the coercive politics that we see.

This makes me realize that in fact, millions of people are looking for an alternative agenda. And it’s up to the young educated people in particular, those involved in politics, or want to participate in society, to have the courage to take up something that may seem radical or utopian, but suddenly, what may seem utopian will become realistic. We must use our skills and to energize people and make them be active. At the moment, there is a feeling of defeat but I hope suddenly this energy can become very positive. And I strongly believe that a lot of people are waiting for that to happen!