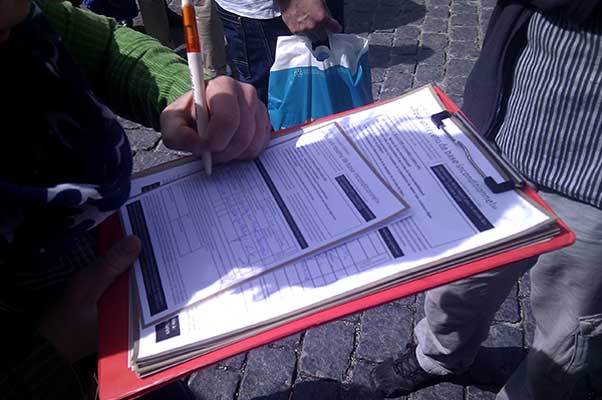 With the success of the federal initiative for unconditional basic income, Switzerland may accelerate the worldwide debate on basic income for all.

Launched one year ago by two basic income groups from Basel and Zurich, the swiss initiative for basic income still has until august to make sure it has the 100.000 signatures to succeed and trigger a referendum, as specified under the Swiss law.

Yet, basic income activists were happy and smiling when welcoming me at the train station in Geneva two weeks ago. With more than 110.000 signatures collected so far, much of the job has been done already.

A referendum within two years?

But even though the press is now unanimous that they are on the verge to succeed, the activists now aim at collecting 130k signatures by august, just to make sure they reach the quorum.

If this goal is reached, then the government will submit their proposal to a votation, where all swiss electors will be invited to vote yes/no to the proposals of the initiative which aims at embedding the principle of basic income into the constitution, like it already is the case in Brazil.

In general, such a referendum is organize within two years after the success of the initiative has been recognized by the authorities.

But the activists are not too much in a hurry. “If the votation comes too early, this reduces the required time for People to get informed, reflect, and make their own judgement about the idea” Ralph Kundig, member of the Basic Income Earth Network branch in Switzerland (BIEN-CH) told me. Though they did not launched the initiative, BIEN-CH decided to rally the efforts of their german-speaking counterparts.

“In fact, the chancellor may speed up the process precisely to take by surprise the initiators, leaving them with fewer time than expected to run the campaign and find the necessary funds for it.” he explains, though he remains optimistic: “on the other hand , if the delay is short, we will benefit from the wave of sympathy generated by the Minder initiative”.

Minder is the name of another popular initiative which aims at limiting ‘abusive remuneration’ which was remarkably approved by the swiss people recently, by a large majority. This success generated a mood of optimism among the alternative spheres in Switzerland. 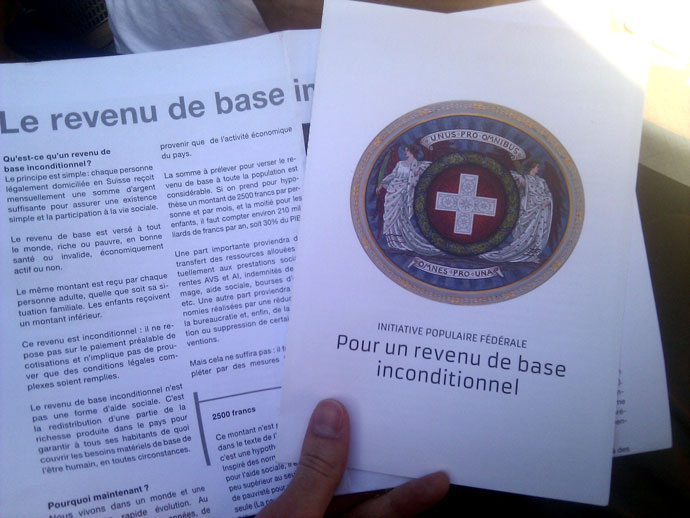 Noteworthy to say, the chancellery of the Swiss confederation also has the possibility to make a counter-proposal to the one submitted by the initiators. This second proposal would equally be voted by referendum, leaving people with two choices when going to the poll. Usually the government’s proposal is less radical, and basic income activists anticipate that the government may propose a ‘fake basic income’, which would not be fully unconditional nor universal, and whose amount would not really emancipate the individuals.

Even though the initiative in itself does not claim for a specific amount of money, 2,500 swiss francs is often mentioned as the proposal behind the initiative. This proposal represents 30% of Switzerland’s GDP, and its feasibility has been demonstrated — only 30 billions CHF would remain to be found.

Contrary to many initiatives, the one on basic income has not gathered a lot of support from unions and political parties. Apart from the trade union SYNA and some sections of the Greens, leftists organizations have remained shy regarding basic income. Some of them clearly opposed the idea, arguing that basic income would decrease wages, mentioning a “bonus for laziness.” Even Myret Zaki, a prominent journalist who makes a living from denouncing finance, said basic income was “a demagogic project which creates a mentality of rentiers.”

Will these critics dissuade the Suisse People to vote for basic income? It would not be the first time the Swiss reject progressive initiative, like they did recently regarding an initiative that aimed at extending holidays.

“Unfortunately, the initiators may be right too soon” said Didier Berberat, a council member of the city of Neuchâtel in a TV report (see video below, with english captions).

Whatever is the result of the coming vote, let’s not underestimate the impact of what is happening now in Switzerland. For the first time in the two centuries History of basic income movement around the World, a 8 million inhabitant country will directly ask its People on the idea.

As a result, people will soon be informed about the idea of basic income in a large-scale, by receiving documentation in their mailboxes and through posters in the streets. This also means all political parties will have to make a statement on the relevance of initiative. “Finally we may break the taboo that surrounds the idea of basic income inside politics”, an activist concludes with enthusiasm.

“Now they take us seriously” “The basic income has emerged in the debate”

“Since we reached the quotum of 100k signatures, the media regards us differently” observes Anne-Béatrice Duparc, member of the committee of the BIEN-CH. As an illustration, the leftist newspaper ‘Le Courrier’ headlined last week was: “The Basic income has emerged in the debate” (picture).

“Now they take us seriously” Anna-Béatrice says, “all the Swiss now have the opportunity to think about the fact that the right to existence should not necessarily be linked to a work position. In itself, this is a victory for us” she concludes.

Even though a large part of the Left still remains to be convinced, supports toward the initiative are accumulating, from different sides of the political spectrum. At a conference with Philippe Van Parijs last month in Geneva, a right wing local politician offered his sympathy to the initiative, explaining how his views on free-market and the invisible hand had changed lastly.

A good news for the european initiative?

While Switzerland is getting momentum, more than european 19 countries have joined their effort for a similar aim: collecting one million signatures in the European Union to force the EU commission to start examining the feasibility if a european wide basic income. Will the Swiss success replicate at the European level? Unfortunately, it may not be that easy. Not that basic income is not as known in the rest of Europe, rather the problem in many european countries is the lack of direct democracy practices.

In Switzerland, people are really used to sign initiatives — and make other people sign. “It’s like a sport” one of the champions of the discipline, Ralph Kundig, told me once. Moreover, because the Swiss cannot sign online, it really force them to go in the street, and that way, get more visible.

In the rest of Europe though, we are still discovering the concept of a popular initiative. For that reason, many people get confused when asked to provide their ID and other sensible informations when signing the initiative. They are used to signing online petition on avaaz or change.org which only requires an email, not to fill in an official form that takes more than 10 seconds.

But whatever the difficulties we face, we must not lose our courage and learn from the Swiss how a small group of citizens may accomplish really great things — if only they dare accept the challenge!

This is an adapted version of an article published in French on revenudebase.info