How Greece might have a shinier future outside euro’s straitjacket 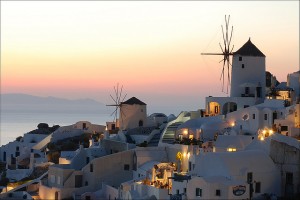 From an economist point of view, it is obvious that Greece has no chance to prosper in the eurozone. However, exiting the eurozone still raises a lot of fears and uncertainties. Fortunately, with some imagination, there may be some solutions to make an exit a real opportunity for  change in Greece.

In the following post, I’ll argue that Greece should seize the banks through a special vehicle funded by the Bank of Greece, opening its banking sector to smaller and local players, and  reconstitute its money supply through the distribution of a monetary dividend to every greek citizen.

The case of Greece is very tricky. After several years of harsh austerity, the country seems to be in a social and economic dead-end situation. Even though austerity is obviously not the solution, the room for alternatives seem very tight so long the country is still under the Troika’s diktat, forcing its politicians to implement the “plan”.

And despite the rise of anti-austerity parties among Europe, the problem remains that it would take months for the EU to swap austerity against a truly european solidarity scheme, with a fiscal union and fiscal transfers among European countries. (Assuming the Germans would go for it…)

So, I think it is time for the Greeks not to wait for anything from a broken Europe that have never intended to help Greece anyway.

Grexit: not just a backdoor for Greece

Exiting the eurozone would widen the possibilities for Greece. Not only Greece would be relieved from the Troika’s orders, its competitiveness would be restored almost overnight, and the country could adopt a truly stimulating monetary policy that Southern Europe has been deprived from.

Yet, banks are preparing for it, and Germans policymakers would let it happen. Only a majority of Greeks still refuse this alternative.

Not without reason. First, for lots of Greeks, leaving the eurozone would be humiliating. Second, this would trigger a lot of uncertainties which fuels People’s fears: hyperinflation, collapse of the banking system, and so on. Third, exiting the eurozone would have huge consequences for others countries, and the Greeks certainly do not want to feel responsible for that.

Even though staying in the eurozone is at least as bad as leaving it, one can understand why so many Greeks are so reluctant in accepting the idea. In a nutshell, the problem with the exit of the eurozone is the lack of attractiveness of the idea. This sounds technically complicated with little tangible advantages in return.

In my view, this is mainly a problem of lack of imagination. Economists and politicians haven’t yet convinced their fellow citizens that exiting the eurozone is the best thing Greece can do today simply because they haven’t drawn an enviable scenario of the exit. Fortunately, there is no fatality about that…

A lot of options become available when you break up with the frigid rules of the eurosystem. For instance, the role that the central bank could have in an exit scenario is particularly under-rated. Let’s explore some radical but efficient options Greece could use while regaining its own currency.

Recapitalization of the banking sector without taxpayers funds 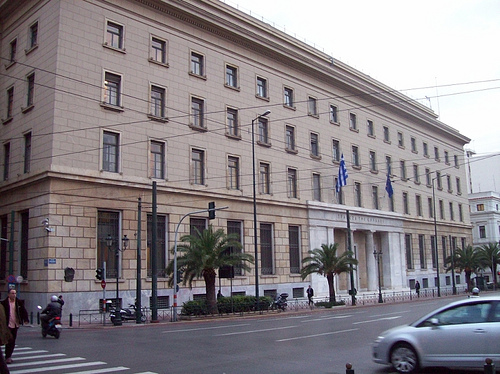 The central bank of Greece

The problem with the austerity strategy is not reforms. The main failure of austerity is to deny the simple fact that too much debt cannot be repaid. Because of this, we are bailing out banks with even more public debts borrowed to the banks (sometimes with other public entities meddling).

Of course, taxpayers are always the one who pay in the end, through public debt services.

That said, the problem if we write down too much debt, is the domino’s effect. At some point, banks collapse and you need to recapitalize them. In the case of Greece, there are obviously very few people who would invest in a greek bank today. The nationalization becomes unavoidable.

However, contrary to what ignorant people often say, with a not-so-much independent central bank (unlike the ECB), you can perfectly take action to recap the banks without using taxpayers money. As this post by George Kesarios suggests:

Now let’s say that the GBBF gets a loan from the Nation Bank of Greece – of say 80 billion euros – and injects these funds in the Greek baking system via common stock capital increases. Common stockholders will be wiped out and the entire Greek banking system will be nationalized (which is going to happen anyway).

That’s it! You have a fully recapitalized banking system and no money was taken from the taxpayers. Better, such a public fund would then collect some juicy dividends from this new healthy banking system, thus reducing the need for tax collection. Oh, and the banks can now return to their normal business: lending money to people and companies creating value for the economy.

(Now, try to do that inside the eurozone…)

Of course, one will object to me that bankers are hmm… bankers ; and politicians are still errr.. politicians. Knowing the characteristics of the greek ruling elite, the risk for this scenario to end in a corrupt cashbath should not be underestimated. (However this should not be a pretext for doing nothing…)

To address this problem, another trick could be involved: opening the banking sector to new players. This new competition would make pressure on the traditional bankers. Thus reducing moral hazard that an extended support of the banking sector always implies.

In practical terms, the Bank of Greece would offer, let’s say 100 special banking licences, for free, to the civil society. These banking licences would be very specific for small banking institutions, on the model of credit unions, tontines or even p2p credit startups. They would be under strict control of the central bank, with size restrictions. More, their activities would be constrained to certain obligations:

Also, the means of payments and IT infrastructures costs would be shared through a common entity that would have a partnership with a traditional bank – or even with the central bank itself, thus providing low-cost credit cards and checkers to the customers.

This way, Greek people will have the choice to move their money to this new institutions, thus increasing market pressure on the old players. Moreover, the Greek economy would be strengthened by a network of brand new local banks that would favor small companies and local initiatives, with a fair redistribution of profits. And People would have a greater control on the destination of their savings.

Not enough? Bail out people (literally)

Want more? Here is another idea that I have been working on for a few months.

Please plug your imagination on. We are friday evening, the 17th of August 2012. When nobody expects it, the governor of the Bank of Greece gives a conjoint speech on public television, with the newly elected prime minister:

After consultation with all involved stakeholders, we have decided to introduce a new currency in this country. The new drachma will take place and replace our official currency as soon as next monday.

Because everyone in this country has suffered from the bad decisions of our predecessors, and because lots of efforts are still to be done, the central bank solemnly announces that every citizen residing in Greece will now dispose of a monthly citizen’s monetary dividend, of 180 drachmas for adults and 90 for children, funded from a monetary annual injection of 20bn drachmas by the central bank.

This dividend is given to everyone with absolutely no conditions. The first transfer will be operated on September 1st, thus enabling those in needs to buy the necessary scholar furnitures for their children.

This measure is intended to last until 2015 with a possible renewal after retrospective evaluation of the program. This measure is conducted in the attempt to cut financial distress among population and to stimulate the economy toward a peaceful recovery. Also, this will give the government more room for manoeuvre in the management of the reforms the country badly needs.

The time for fighting and protesting is over. May this citizen’s dividend help each of you have a better life for you and your relatives. May this dividend help us all to participate in the reconstruction of our nation. Long live Greece!

Well, consider this. Giving money to people isn’t the best way to have them using your currency? Who would throw this money away? Because everyone would have drachmas in their pockets, the new currency would be quickly adopted in the country and a possible euro black market would remain marginal.

Moreover, the money printing of 60 bn (for three years), distributed through individual cash transfers would actually replace progressively the emergency lendings that the Bank of Greece has been injecting to the banking sector until now (emergency liquidity assistance). And thus improve the banks’ solvency by the reconstitution of the deposits that greek banks have lost because of people understandably trying to save their money abroad. In exchange, people trying to bring their euros back in Greece should be taxed (the collected taxes would be used to pay foreign currencies denominated debts).

Of course, one may object to me that such a policy would be inflationary. I don’t think so. It might be stupid to remind this, but the problem of Greece today is that too many people are lacking of money (even those who have a job). Because of this simple fact, over the counter debts are increasing, companies are losing their customers, people can’t pay their taxes, and so on. As a result, deflation is much more of a problem than inflation. And even though inflation were to threaten, the average purchasing power would still be better with the monetary dividend than without.

With this debt-free money flowing into the economy, people would be able to repay their private debts. The improvement of their financial situation would break the spiral of social fraud and tax evasion due to of financial distress. And since it is a medium-term policy, companies observing a rise of solvent demand, would hire again. 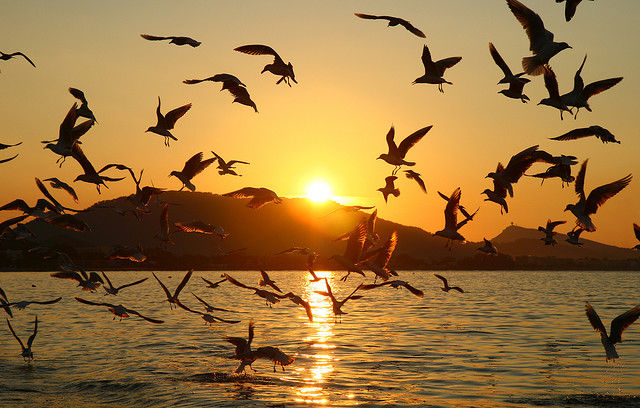 Similarly, with such outlooks, the banks would lend again in the economy, making possible, notably for exporting companies, to invest and grow. Entrepreneurship and social activities would also be encouraged with the implementation of this unconditional safety net, that would not require much bureaucracy. Reforms as well would be easier since everyone would not be struggling to make a living. Downsizing the government would be possible without sacrifying social justice and solidarity.

Not to mention, a totally unconditionnal grant is quite hard to fraud…

Time for a plan B

Now that fresh elections are almost certainly set to be held again in Greece, we might be witnessing the opening of a new window of opportunity for the destiny of Greece. With Europe turning slowly its head away from austerity, now is time for finding the next direction.

In this regard, exiting the eurozone is not just a backdoor for Greece. Actually, it may well be a unique opportunity to break the entire wall that Capitalism is going straight into. If only we dare to look seriously at the existing alternatives.

PS: Please share your views on the above proposals: they are meant to be discussed and improved. And if you’re interested in making these ideas heard, don’t hesitate to get in touch with me. Everything is possible 😉