I can see the future (before Reuters)

Every month, the news agency Reuters publish the monthly data of Greek banks’ reliance on the eurosystem fundings… one month later than their real release date. I’ll demonstrate this.

Central banks refinancing operations datas are an important indicator of the private banks solvency and funding situation. The more a bank owes money to a central bank, the more funding issues it suffers from. Indeed, it means the bank cannot funding itself on the interbank market, probably because competiting banks can’t trust the bank they will get their money back. This explains why financial reporters are getting interested in these sort of data publication.

Fundings of banks gave been a huge problem for Greece. Since the beginning of the crisis, their reliance on the European Central Bank (ECB) refinancing operations have been constantly growning to about 110 billion euros, mainly because of a deposit flight (around 50bn euros since 2009) and the frozen interbank market.

It worsened last summer, when Greece’ central bankers asked the ECB council of governors to trigger the “emergency liquidity assistance” scheme, which enables a National central bank to lend money to its banking system, regardless of the regular rules of the ECB. Concretely, this means the NCB is lending money to private banks without much collateral, and on its own risk, not the one of the eurosystem.

As opaque as these operations are, we know, notably from the irish experience, that these operations are usually conducted from month to month, and that the NCB applies an interest rate higher than the ECB regular operations. About the collateral, State guarantees should make it.

Last week, Reuters reported the december data of the greek banks’ reliance on the eurosystem fundings. According to the news agency:

ECB funding to Greek banks rose by 2.76 billion euros in December from the previous month while emergency liquidity assistance (ELA) from the Greek central bank eased to 38.03 billion euros, Bank of Greece data showed on Monday.

I am not challenging Reuters’ figures, but yet I can  announce to you that these figures will get higher by the end of january, to 116 bn overall.

How do I know that? Nope, contrary to the title of this post, I can’t read the future neither have any insider information from the Bank of Greece. However, I have the time to sneak into a central bank website and luckily, I found where the most recent datas are.

Reuters probably used the 2011 annual accounts released on March19th by the bank on its homepage. But more recent datas are also available on this specific page of the website. There you can find the most recent balance sheet of the BoG, even with a downloadable spreadsheet file.

Thanks to this file, i was yet able to create this chart some weeks ago: 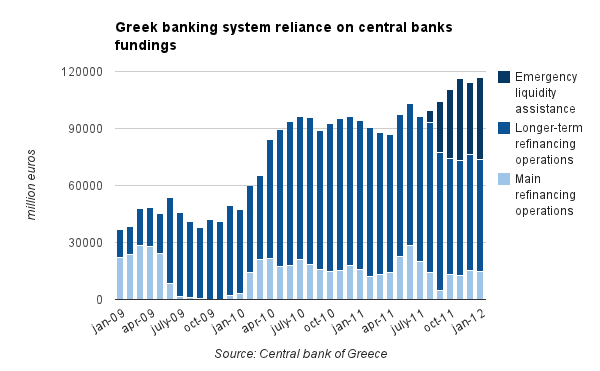 Let’s make clear I am not blaming Reuters’ reporters: it is not intuitive to look for these data when a central bank is supposed to published them monthly and notify interested people they did. Before I discovered these datas, I found myself difficult to get the accurate figures and was even getting suspicious about the willingness of the Bank of Greece to release them on time, especially  in these troubled times.

Actually, it is common knowledge for many vigilant observers that central banks are not putting a lot of effort in providing good data in usable format for journalists. There would be a lot to say in this domain, something I will eventually do in the future.