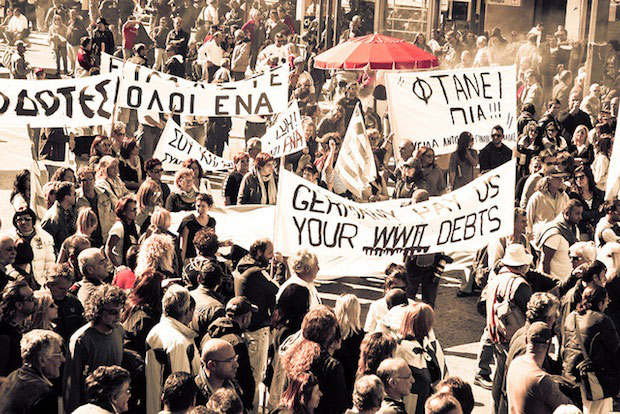 Greek newspaper recently unveiled that a special commission mandated by the greek government has calculated how much money Germany owes Greece form the World War II. From Der Spiegel:

The [greek] newspaper offered no concrete figure regarding the possible extent of reparation demands outlined in the report. But earlier calculations from Greek organizations have set the total owed by Germany at €108 billion for reconstruction of the country’s destroyed infrastructure and a further €54 billion resulting from forced loans paid by Greece to Nazi Germany between 1942 and 1944. The loans were issued by the Bank of Greece and were used to pay for supplies and wages for the German occupation force.

Now, it is said that 80% of the Greeks want their government to pursue Germany to get the money back.

But there is a little problem. If we follow the reasoning, should Germany also repay the reparations debt that were owed to France after World War I, as ‘agreed’ in the treaty of ‘peace’ of Versailles? After all, these debts too were never fully repaid by Germany, which eventually caused the Occupation of the Ruhr by the French and Belgians, choked off production and led to the so-called Weimar inflation period. We all know what these war-related debts result in: more resentment, more crisis, and eventually fascism to rule a country.

Do we really want to open this Pandora’s box?

Really, it’s not about having Germany repaying these debts. Rather, what History tells us is that some kind of debts should not be repaid. Or, as Michael Hudson puts it:

Debts that can’t be paid, won’t be

And this is valid as for the greeks claims on Germany as for the Greek current public debt. Let’s not distort the debate around cross-border resentment, and try to understand the very nature of debts: mere promises made at a certain point of time, under certain circumstances. Therefore, when circumstances change, so do the promises made beforehand.

Now, if you wonder how to get out of this mess in an orderly and peaceful way, I recommend you to have a look at some proposals such as the Modern Debt Jubilee or quantitative easing for the people.