The squeaky problem of the greek silent bank run 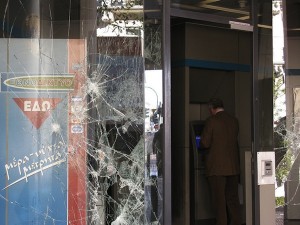 With the crisis, greek banks have been suffering from huge deposit flight. Official figures show that at least 80 billion euros have been moved abroad since 2009. What consequences for the greek economy? And how to address the problem?

It is very well known now that greek banks are under great funding pressure, notably because of a “silent bank run” that started 3 years ago. According to the Wall Street Journal, the greeks withdrawed 700 million euros last monday, with the elections uncertainties.

As the chart below shows, deposits held in greek banks have kept falling over and over since 2009. Last march, the banks lost almost 1bn of deposits again, after a bloody february of 6 bn euros of losses. In total, between 70 bn and 80 bn euros have fled abroad since january 2009. 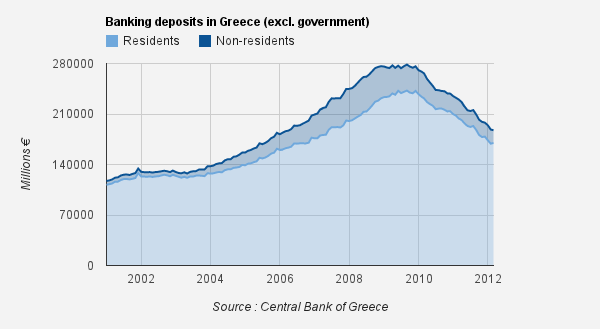 Greek banks have suffered a lot from this phenomenon. Not only they were banned from international money market, but the deposit flight also weakened their solvency. In such difficulties, the banks had no choice but to rely on the ECB’s tap. Since 2010, their reliance on the eurosystem open-market operations have risen from 40 bn to 110 billion euros, of which 40 bn are regularly provided through the so called “emergency liquidity assistance” instrument (ELA). The use of this emergency line is another warning signal of how bad is the greek banking sector.

The fall of banking deposits in Greece is mainly due to a number of greek people that have withdrawn their money from their banks, by fear of loosing their savings because of their failure, or sometimes to protest against greedy bankers.

Some of them are simply hoarding cash under the mattress, or bought gold instead. Others sent their money in safest banks around Europe, because the amount of money they own would not be covered by the deposit guarantee scheme in case their bank goes bankrupt.

For those, the move is also very opportunistic. By depositing their savings in Switzerland or Germany, not only their money is less likely to be lost in a bankruptcy, but they also avoid taxes. Moreover, if Greece were to exit the eurozone, this would leave these people with euros instead of drachms. And because the new drachma would depreciate by at least 40%, theirs savings would have much more purchasing power if they bring back this money in Greece.

One may criticize people for behaving like this and thus threaten the greek economy. But after all, these people are just playing by the rule and trying to protect themselves. As Klaus Kastner says:

If I were a Greek, I would certainly transfer my Euro-savings to a bank outside Greece to protect against the risk that my Greek bank goes bankrupt, that my Greek deposits become frozen or that my Euro-deposits are converted into new drachma. Since EU-elites have warned me for almost 2 years that all of this might happen, I would consider myself prudent instead of unpatriotic.

Still, this is unfair for those who simply did not have much money to move, or could not afford to pay some fiscal advisors who would move their money for them. While the poorer would keep on struggling for life, the richer would have huge opportunities to move their money back and buy properties in Athens or elsewhere at a discounted price. And given the situation, they would certainly find sellers (especially over-indebted people) that badly need the money.

Put simple, if this were to happen, the grexit would be an accelerator of inequalities in Greece. 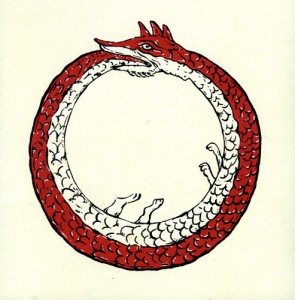 The problem is that the more rumors about Greece exiting the eurozone are on the media headlines, the more greeks are encouraged to withdraw their savings. Which in return makes the probability of such a scenario even more likely, because the ECB won’t close its eyes forever on the solvency of the greek banking sector.

Indeed, a central bank is supposed to refinance illiquid banks, not insolvent ones (even though the nuance between the two is very thigh). Therefore, if the situation goes on (and it will), then someday the ECB will have to close the tap for greek banks, leading de facto Greece to exit the eurozone.

Which makes me wonder: How to manage a greek exit in these circumstances?

Unlike what many people say, I think establishing capital controls to prevent people from moving their money abroad would be quite useless once the exit is announced. Those who wanted to move their money already did. Just freeze all accounts, ration the ATM withdrawals for a while, then convert all banking accounts, and you’re done.

The real problem is much more about how to manage the incoming flows of capital. How to encourage people to bring back their money to reinvest (and use the drachma) in the national economy without giving them too much easy opportunities compared to their fellow citizens?

Under my plan, I claim that the government should create a new tax on the payment in euros or transfers of euros into Greece (or any other foreign currency). Of course, the goal of the taxation would be to decrease the purchasing power of euros in Greece. For that matter, the tax rate could even be pegged to the exchange rate of the new drachma versus foreign currencies.

The tax rate would still favor euros vs. drachms, thus encouraging people to bring back their savings, but it would make these people contribute to the funding needs of the government. The foreign currencies collected by the State could be very useful for the government to repay some external claims still denominated in euros…

Second, let’s explore the effect of distributing 180 drachms monthly to absolutely every greek adult residing in the country without means-tests. With such a measure (see my earlier post about that), you will be improving the financial situation of a lot of people, thus less willing to fire sell their houses or default on their mortgage and leaving the property to the bank. This could possibly strengthen the market value of properties in Greece.

Also, the injection of 60bn drachms (30% of current M3 aggregate) would progressively replace the lost deposits of greek banks. At the same time, the central bank will be able to withdraw its liquidity assistance (notably ELA) to the private banks. To curb inflation pressure, the central bank will probably have to increase the reserve ratio of banks, thus limiting their power to issue credit too quickly.

From a macroeconomic point of view, a second effect of such a policy would be that the relative share of the 1% on the total monetary mass would be decreased, to the benefit of the 99%. In other words, they rich would still be rich, maybe even richer, but less richer, comparatively to the average population who would truly benefit from the monthly 180dr income. Inequalities would be reduced.

Oh, and deposits would not be a problem anymore.

This solution might seem too simple, but I haven’t found any strong objection to this yet. Do you?