The European Central Bank is suspected to have lent more extra money to banks than we knew so far. While some people suspect spanish banks for being beneficiary of  such operations, Cyprus’s banking system could also be concerned. Here are at least some intriguing evidences.

[update may 11th] Last data release by the central bank of Cyprus confirms the assumptions made in this post. Read more here.

It is common knowledge for wise eurozone observers that parts of the european banking sectors are under great liquidity pressures, leaving no choice to the ECB but providing extra liquidity, without regular collateral requirements. Such lendings are mainly operated through the emergency liquidity assistance (ELA) scheme, under wich a national central bank can lend extra money to private banks, with the agreement of the ECB’s council of governors.

So far, we know that Greece, Ireland, and more anecdotally Belgium and Germany have been using the ELA instrument. Irish banking sector in particular, is famous for being addicted to these fundings to an average amount of 45 bn euros. Meanwhile, Greece reliance on these emergency liquidity is more recent and volatile. Emergency support of greek banks have stagnated to 40 bn euros for some months and then peaked to 70 bn at end-february. This peak was related to the ECB’s decision to suspend Greek sovereign bonds as eligible collateral, thus forcing the Bank of Greece to extend its ELA support. However, this problem is believed to be solved now, with the PSI plan being fully implemented. 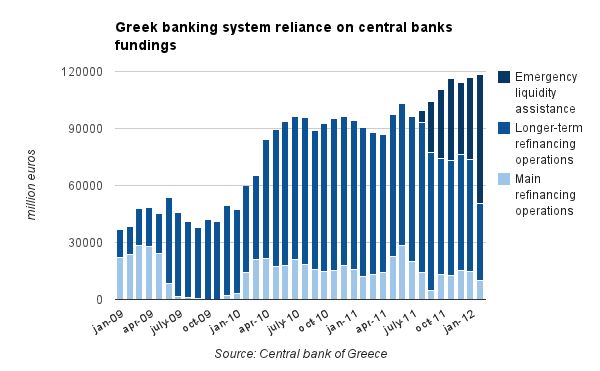 One other idea could be Belgium. Lastly, the bank Dexia, whose dismantling plan is under way, also tapped the National Bank of Belgium’s ELA again, to an amount of about €20 bn in october and november 2011. But the problem is supposed to be solved now, at least according to Dexia’s officials and the NBB’s balance sheet, that looks clean according to last figures.

Is the ECB hiding other emergency liquidity operations elsewhere in the eurozone ? Possibly, according to the FT’s journalist Ralph Atkins, who writes on the Financial Times’ blog Money Supply:

(…) we know that its use is extensive in Ireland, where some €45bn is being supplied (at least the Irish central bank is transparent), and in Greece, where I understand use peaked at about €70bn, but is thought to have fallen since.

But in its weekly financial report, just released, the ECB reveals a €121bn increase in claims on eurozone banks, which it says was the result of putting all ELA use under one heading.

That, is a nice spot. Indeed, as the ECB published on its last weekly financial statement:

So, assuming Ireland and Greece didn’t tap further ELA lendings, which banking sector could be the beneficiary of these ~10bn extra support?

As Ralph Atkins writes, “Fingers will inevitably point to Spain” who is under market pressures on the sovereign debt front, while its banks are known for their increasing exposures to bad loans and ECB funding reliance.

This sounds plausible. However, I have another lead to submit…

A few months ago, I had noticed some weird moves in the central bank of Cyprus’ balance sheet. Here is a home-made chart that summarizes the main changes I saw in the past 12 months: 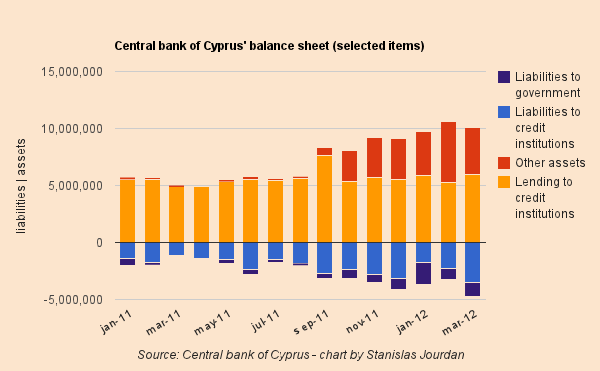 Overall, the Cypriot central bank’s balance sheet size have increased from 11bn to 16bn euros (reminder : Cypriot GDP = 17bn), notably due to an increase of €4-5bn in the “Other assets” item. As we know, this item is typically used for ELA operations. In other words, Cyprus would alone explain at least one part of the 10bn gap found by Ralph Atkins calculations.

Is this the case for Cyprus? I am not sure yet, because a number of other elements could explain the rise in the “other assets” item.

First, we can see a rise in “government related liabilities”, which might imply some kind of support from the government to its banking sector. After all, a rescue plan is currently negociated between Cyprus and the ECB.

Following the blast of one of its electricity plant last july, Cyprus reached a €2,5bn bailout deal with… Russia, with a first payment (pdf) made end-december. Maybe the money was used for supporting the banking sector, with the central bank meddling the transactions? Who knows…

On the Cypriot Finance Ministry website, I also noticed some announcements regarding the Government deposits held in its national banking sector, which could possibly explain somewhat the situation, but I have not enough information to confirm anything (and my greek level is too low unfortunately).

All in all, even thought I have no real evidence on a relationship between the last ECB accounting notification and the Central Bank of Cyprus’s curious move in its balance sheet, it seems clear that Cypriot banks are getting fundings through a non-standard channel…

So, if you have any information/ideas that would clarify the situation of the central bank of Cyprus, please share them below !