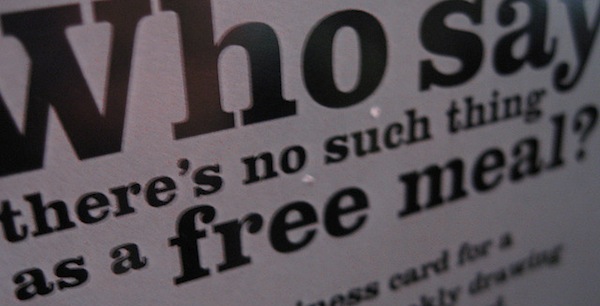 Back in october, I wrote a (quite successful) piece on OuiShare.net (for which i’m co-editor in chief) on the “destroying jobs” effect of the collaborative economy. As I claimed:

something new is happening with the collaborative economy. Instead of creating new industries that are based on mechanisation and thus require the production of new robots and machines as in the 20th century, what we are witnessing is a shift from jobs towards unpaid labor from a crowd of volunteers. Take open-source softwares or Wikipedia for instance, and imagine this for the whole economy. Long story short, this is not about less work, but about having fewer paid positions.

Therefore I arrive to the conclusion that a huge part of the value creation is merely recognized through our current economic system:

The major point of the Collaborative Economy is that value creation is being scattered among society. This makes it difficult to be measured. For instance, consumers are now involved in the co-production of the products they buy. The problem is not only that they do not get paid for their contribution, but a large number of companies would not even exist if they could not use open-source tools created by communities of developers, long before these businesses were even created, for free. In other words, a large amount of the market economy’s profits is built on a large free lunch – the one of the non-market economy.

Interestingly, Financial Times’s reporter Izabella Kaminska dedicated a post to mine, in which she emphasizes again my ultimate point:

is it fair for a corporate that depends entirely on voluntary input for its capital returns, to suck up those profits entirely for itself? Or should that wealth somehow be shared amongst the collaborative community?

As my loyal readers would expect, I would argue that necessity of a basic income – as a recognition of unmeasurable economic contributions, just like “bees that fertilize flowers by carrying pollen”, as french economist Yann Moulier Boutang claims.

But Izabella Kaminska brilliant’s post brings up another point: the monetary approach to it. She writes:

Another way of achieving the same result, of course, is simply by debasing the rents collected by industry via permanent money creation — so as to offset the disproportional wealth effect on today’s tech rentiers as well as older generations, which all things relative, appear to have over-benefited from the first mover advantage associated with their era. So not dissimilar to what’s happening now, but with one important difference: that the newly created money flows directly to spending individuals rather than corporates, savers and banks, who do anything but spend.

I entirely agree with Izabella: one doesn’t need any taxes to finance a basic income (or any similar program). On the contrary, there are many advantages to the money creation approach, like bypassing bureaucracy and avoiding costly and inefficient means-tested anti-poverty programs. Instead, let’s fire up the central banks’ helicopters, job done.

Izabella also makes a very valid point while pointing out the distributional effect of current economic system towards an older generations of capital owners, who takes benefit of the increasing share of the economic value being created outside of conventional labor. As she ultimately concludes: yes, there is a free lunch after all, the one of the non-market crowdsourced production.

While I am not much surprised to see this kind of thoughts coming from a smart journalist like Izabella Kaminska, this is very positive to see that these ideas I have been claiming this for years finally gets some official reckoning among established publications.

This makes me very optimistic for the coming year. Happy new year everyone 🙂