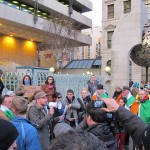 On Thursday, the Irish government announced that it reached a deal about the promissory notes issue, that forces Ireland to pay 3,06 bn euros on march 31st. But this deal actually does not defer any payment neither relieves Ireland from its heavy debt burden. In France, the only newspaper that reported about this information was Les Echos. But […]