Is France in denial? Not more than the rest of the World 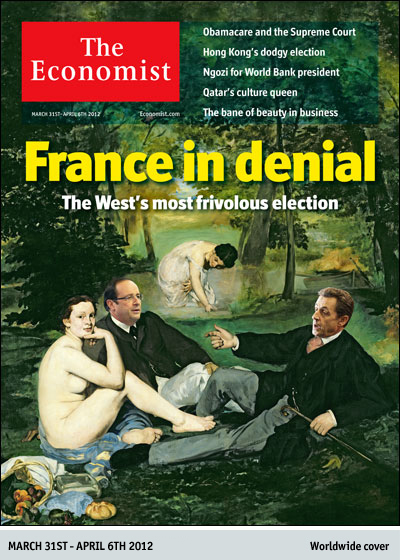 Last week, The Economist published an astounding piece about the French elections, entitling its weekly magazine “France in denial“. Here is an abstract that will give you a taste:

Yet what is most striking about the French election is how little anybody is saying about the country’s dire economic straits. The candidates dish out at least as many promises to spend more as to spend less. Nobody has a serious agenda for reducing France’s eye-watering taxes. Mr Sarkozy, who in 2007 promised reform with talk of a rupture, now offers voters protectionism, attacks on French tax exiles, threats to quit Europe’s passport-free Schengen zone and (at least before Toulouse) talk of the evils of immigration and halal meat. Mr Hollande promises to expand the state, creating 60,000 teaching posts, partially roll back Mr Sarkozy’s rise in the pension age from 60 to 62, and squeeze the rich…

In a second paper called “The French elections: an inconvenient Truth“, the british magazine details how much the economical debate is avoided in France. Here is another excerpt:

How can France be holding an election that so signally fails to confront the right questions? What are the chances that any of the candidates, if elected, is ready to face up to the shock that is to come?

The inconvenient truth is that whoever emerges the victor on May 6th will need to show a tough approach to the deficit, in the face of wary bond markets and possible recession.

Obviously, The Economist exaggerates a bit, but overall their pieces mirror pretty well the general sentiment now trending in France: these elections are the worse we ever had.

In my circle, very few people already know who they will vote for. From this point of view, the French People are not in denial at all : not a single candidate offers real alternatives.

Funnily, some candidates admit by themselves the low-quality of the debate. For instance, François Bayrou (center) spent 7 minutes on air expressing his regrets about the situation and mentioning the media treatment of the foreign press.  He even claimed that Sarkozy and Hollande had an agreement for avoiding the economic debate… but did not offer any solution to the crisis.

Although I agree with The Economist when criticizing the lack of ambition and seriousness of the candidates, I am more skeptical when the newspaper comes to congratulating Spain and Italy for their commitment in reforming the country. First, the case of Italy is significantly different since Mario Monti was not elected, which is probably why he is able to reform the country so promptly. On the case of Spain, I am afraid more austerity programs will not be socially acceptable for ever, neither efficient economically.

France might be in denial, but  focusing on austerity is probably another form of the same disease.