Life is too short for long-term plans 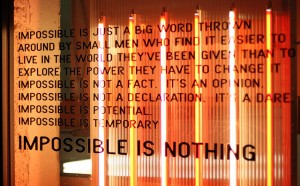 What is the most realistic approach for solving the crisis? A long-term plan or short term claims?

My last proposal for Greece aroused several critics from some people who think my proposal are “like trying to talk romance to a whore”. According to them, what we need is a long-term plan to restore competivity and growth, not free equity from worthless banks, which will not even “give a boost to the economy”.

Of course I’m not against drawing a long term plan for Greece, and yes, I think people and investors need a vision of the future development of a country to get confidence back in society.

But do we just have time for that? People are already starving around there. And as long as we don’t provide them any concrete answers tomorrow, anger will follow hunger. And violence will become more and more the outlet for despair.

The problem with long term plans is that these are merely goodwill promises. It will take time to be achieved, if it ever happen. I think People do not believe in promises anymore. We are all running out of patience. We want concrete actions, not beautiful promises, especially when they come from politicians who just want us to vote for them. Confidence will only come back when people see concrete improvements in their personal lives.

If only our policymakers had a vision of the future, long-term plans might work. But they don’t. They are still thinking in a 20 years old mindset, talking about industrial development while yet Chinese workers are being replaced by robots, talking about GDP which, we all know, doesn’t mean anything. Talking about ‘debt’ not even knowing what debt and money are. Even our French “minister for economic recovery” doesn’t have a clue, I was recently told by an insider.

Seriously, most politicians are out of date.

But aren’t my proposals requiring them to do something? That is true, changing monetary policy or implementing a basic income basically require important decisions at the top level.

But i’m not stupid. I know that no one up there will never do something like that. Except… if they are left with no other choice to do so.

Thus the only chance to have this done is by pressuring the policians like hell. This means forming a huge social movement that would claim for a very precise and powerful list of claims. More than a long-term plan, we need to claim for 3 or 5 concrete measures that are feasible by tomorrow morning if we get the political will.

To me, basic income, monetary dividend, sortition and free equity share belong to these kind of ideas that are just waiting for some politicians to do it. Moreover, such ideas would have a huge impact on both the whole economy and on individual and collective consciousness. Thus, our long-term vision will become much more clear once we achieve them.

Live the romance you are talking about

But this is not all. While we make the pressure growing, we have to experiment these ideas within our own communities. Make them a reality even before those in power finally make them a mainstream thing. Yet this is what Occupy’s Strike Debt movement is doing: they are claiming for a modern debt jubilee, but at the same time, yet they are doing a “rolling jubilee” (a sort of P2P bailout for over-indebted people). Doing this, they make medium-term claims compatible with concrete short term action.

In my personal case, I am not looking for a job because I assume my current activities are creating much more values than many employees around there. And I am trying to prove everyday that we can do great journalism outside of traditional media corporations. Within OuiShare, like many other sharing communities, we are building our own ecosystem, our own economic rules, based on our own values. By doing this not only do we protest against the system and claim for change, but we also convey a concrete message through action.

It’s great to think long-term, have a vision and so on. But if you don’t start making it today’s reality, what’s the point?