Protesting against each others 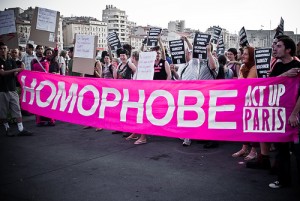 Not only the French conservative party’s leaders are fighting against each others. The whole French society seems to be sliding towards a civil war, as last week antigay marriage manifestation showed.

Ok, I might be exagerating a bit. But still, I find it very telling that approximately 100.000 people protested last week against the government’s gay marriage law. Quite a huge number in my opinion.

Just another french protest, you may say. It is not. Whatever the number, the thing is, people usually protest when they their rights are being denied, decreased or more generally, when they feel oppressed. People protest for themselves. This time though, people did not protest for their own interest. They did it against the interest of their fellow (gay) citizens.

How can one protest against the rights of other people, especially when they are not directly concerned or oppressed by these people? Honestly, this is something I can hardly understand. I would personally never do that. If only people just left others live the life as they want as long as it does not interfere with theirs rights, this World would be such a more peaceful place…

Beyond the question of the gay rights, what we are seeing here is the rise of moral values being used as pretext for protesting against certains group of people. And the problem is, one cannot rule a country according to moral values without dividing its citizens. Moral values necessarily divide people, just because well, people are different, so they don’t think all the same. Fortunately!

So, trying to impose your own values to a whole society is, I’m afraid, is a very worrying signal of the rise of fascism in France – like elsewhere.