A golden rule for discussing about gold standard 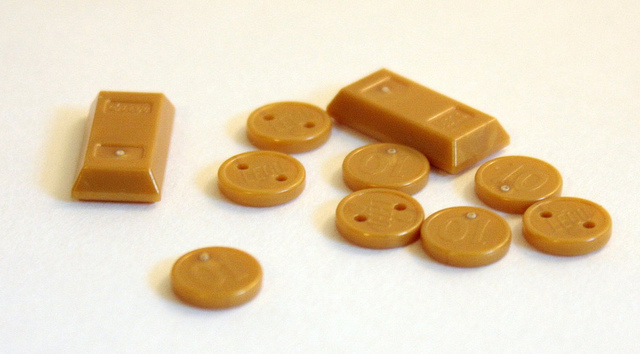 When talking about money and more specifically on the gold standard, there should be a “golden rule”. Not a time limit, just something simple like: every participant in such a debate must disclose how much gold (or silver) he owns.

I spend a lot of time discussing, learning and talking about money. May it be online through blog posts, forums, videos, or in real life, I can have very interesting discussions with market monetarists, neo-chartalists and other random people despite strong disagreements. With gold standards rulers however, discussion seems impossible at some point.

According to the leitmotiv of these people, the return of gold/silver standard is the only way to reintroduce discipline in the banking and monetary system. Because gold’s value (its scarcity) is recognized, that would constitute a backstop to Humanity’s tendency to pursue credit expansion and debt-driven fake growth. “That way, confidence would be restored”, they say.

A bunch of people including numbers of famous financial commentators that you can regularly hear about on tv-shows are holding this take and very rarely consider the alternatives.

For a while now, I have been searching for a reasonable reason why these people are so close-minded. I can understand why the return to gold standard is argued in times of crisis. What I cannot understand is why people just cannot consider seriously other ways of defining money than a gold-backed currency.

In my attempt to understand this, I periodically found myself having this curious intuition that my interlocutors are in fact not only claiming for a pseudo reasonable monetary reform; they have a huge personal interest in having this put in place. In others words, i guess there is probably a bunch of people around there that are sat on a pile of gold, and thus unsurprisingly find it a good idea to get back to an old-fashion system in which gold is err… hard cash.

Obviously, I have absolutely no proof on this (and this is why I am not name-dropping anyone here). I can only say is that very intriguingly, gold standard’s advocates are often wise people that have been focusing on the crisis for some time now. Very likely (and understandably), most of them, anticipating the crisis coming, might have started protecting themselves buying bars of metal some years ago, at a cheap price for now.

Which would explain this sort of fury in defending the gold standard as the basic rule of our next monetary system.

Perhaps, if these people could prove they don’t have any gold, their speeches would be more listenable to me. But of course, one can rarely prove what he doesn’t own. And the opposite is quite difficult as well. So does my “golden rule”.

Again, in the absence of sound evidences, I don’t want to blame anyone here. Better than that, I just want to advice some people to be prudent when listening to gold standard defenders’ stance. Where do they stand from? How related are their personal interest with the monetary system? This kind of question will never be asked neither answered publicly, on air. So it’s up to citizens to wonder about this.

Moreover, one must say it: the simple fact that many people have been accumulating gold for years makes the gold standard idea undesirable. It would obviously make some people that are already rich, even richer overnight.

Last but not least, let’s be clear that I agree with gold standard’s champions that restoring confidence in the monetary system is an absolute emergency. Confidence, however, is not something built upon some curious yellow stones. Confidence is what emerges from the agreement of free-minded individuals to use the same means of exchange in a community. Basically, people will trust a currency because they trust the fairness of the rules behind it. How can such an agreement be reached?