A run on the spanish banks?

Is there a bank run on the Spanish banks? According to El Mundo, Bankia’s customers did withdraw 1bn euros on a single day last week (the information was then denied by spanish officials). True or not, these allegations are a good opportunity to have a look on the long-term evolution of the deposits in Spain.

In a recent post, Alejandro López claims that spanish banks lost 50bn euros of deposits since january 2011. This is untrue according to my own findings based on the Bank of Spain statistics: all deposits (including non residents and MFIs) have even increased by 11bn on that period. Here is a home-made chart that shows deposits evolution in the spanish banking sector (until march 2012): 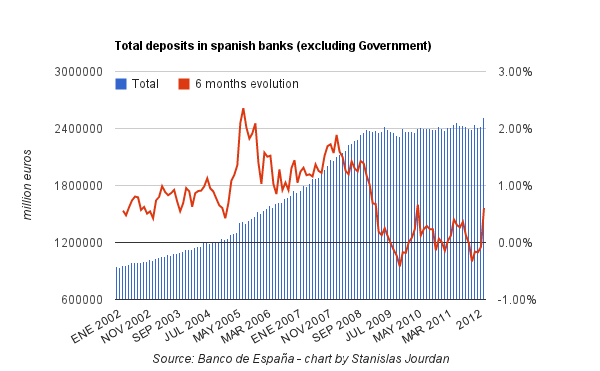 As we can see, deposits have clearly stagnated since 2008. However, the chart becomes much more worrying if we exclude monetary financial institutions deposits. Then we can see a decrease of private sector deposits by 118bn euros since january 2011.

However, i would say that there is currently no evidence of a silent bank run in Spain like in Greece or Ireland. At least not yet : next data release will tell us if the trend is accelerating or not.

What remains certain is that spanish banks are under great pressures on the asset side of their balance sheet. Their non-performing loans portfolio have increased again by 1,08% in march, to 148 bn euros. 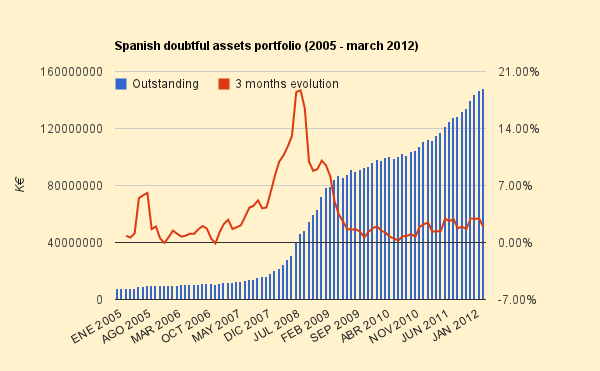 These bad loans, essentially mortgages, represent a potentially big and dirty black hole for the spanish banking sector. At some point, someone will have to pay for that. And I guess depositors won’t be too happy if they are told to do so.

PS: The data I used are available here, reduced from the Bank of Spain deposits and target2 liabilities.