European banks lifeline round up – march 2012

As the crisis deepens, europeans banks are increasingly relying on central banks. What does it mean for the real economy? 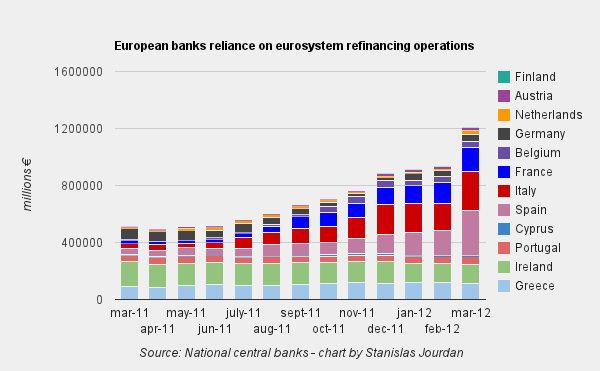 On the whole, the eurosystem is lending roughly 1,200 bn euros to the european banks. A rise mainly attributable to the “LTRO 2” operation conducted by the ECB at end-february. Since then, the figures undisclosed by various national central banks have shown no sign of any change in this trend.

As you can see, Italian and spanish banks reliance have been rising significantly lastly. French banks’ reliance is increasing as well. At the end of the last maintenance period, they owed 169,1 bn euros to the ECB, while their deposits were only peaking at 138,7 bn euros. 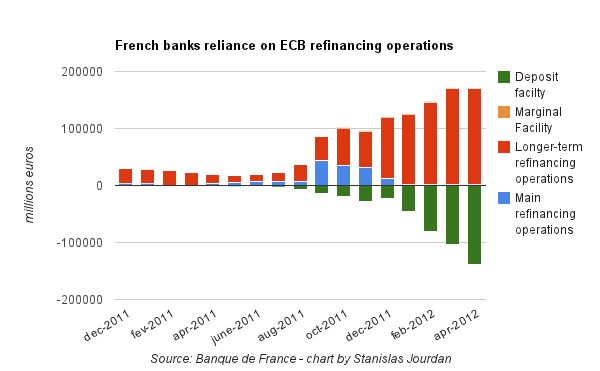 Now, question: Is this money really going to stimulate the economy?

For a big part, banks have tapped this money to satiate their fundings needs rather than using it for money multiplier (ie lending it into the economy). This is notably the case of spanish banks that are under great pressure because of their bad loan portfolios and their rising difficulties to raise funds on the interbank market or money markets. In other words, the ECB refinancing operations are progressively replacing private fundings.

The problem is that if this money does not stimulate growth, we are going to witness an increase of defaults, which will in return end in banks being downgraded by rating agencies (oops, already in process) and further haircuts applied on the collateral parked at the ECB to access the ECB funds. The ECB may close its eyes for a while, but at some point, it will have no choice but to cut the funding access, as it did yesterday for greek banks. And even though the Bank of Spain can then replace the ECB with emergency liquidity assistance, the very problem will not be fixed: a lot of debts are not going to be repaid.

Worse, the central banks (public institutions) will take the losses instead of private investors.

The failure of policymakers

More than never, we need a plan that includes both a restructuring of public and private debts and a stimulus for growth. Both are necessary: if you only write off debts, you would create a deflationary spiral of recession, with a huge amount of money destruction. If you only stimulate growth without restructuring bad debts, you would only create a bigger pile of debt, thus preparing the next crisis.

The ECB is doing the exact opposite by supposing that banks are solvent until its own policy eventually make them not being as safe as it was assumed.

As The Economist relevantly said one year ago, policymakers are painting themselves into a corner. I’m afraid this will not end without any traces. 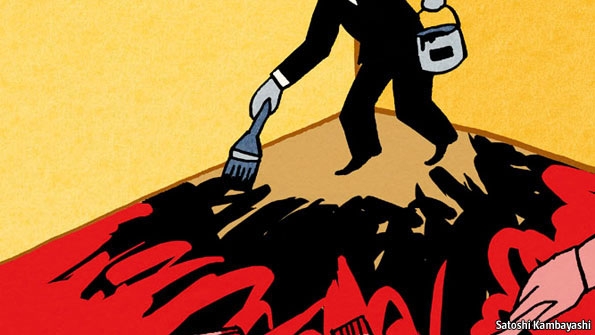