The last balance sheet released by the Central bank of Cyprus confirms that the cypriot banking sector is under emergency liquidity assistance injection.

Last month, I suggested in this post that the Cypriot banks were out of collateral and thus had no choice but to tap extra liquidity from the central bank of Cyprus. This liquidity is usually provided under the emergency liquidity assistance scheme (ELA), by national central banks, with the agreement of the ECB’s council of governors.

Because the data released by the central banks are not always very clear neither detailed, it it sometimes hard to interpret the figures. In the case of Cyprus’ central bank, the balance sheet available on the bank’s website is very minimalist and therefore the presence of ELA in Cyprus was still unclear.

However, apparently due to an harmonisation of the data publication among the eurozone initially spotted by the FT, last Cyprus’ central bank balance sheet release is much clearer. In the document (available here), we can clearly notice a move of 3,8 bn euros from the “Other assets” item to “Other claims on euro area credit institutions”, which is apparently the item chosen by the ECB to unveil ELA refinancing operations. At least according to the Irish central bank’s last balance sheet, where a footnote states:

An accounting reclassification took place, in month ending 27 April 2012, in order to harmonise the disclosure of the Emergency Liquidity Assistance (ELA) provided by Eurosystem central banks to domestic credit institutions under other claims on euro area credit institutions denominated in euro.

In other words, at end-april Cypriot banks were indeed benefitting from 3,8 bn euros of ELA. And I am now able to assume that such operations have been effective from september 2011 until now, to a level comprised between 2 and 5 bn euros.

A quick chart to sum up: 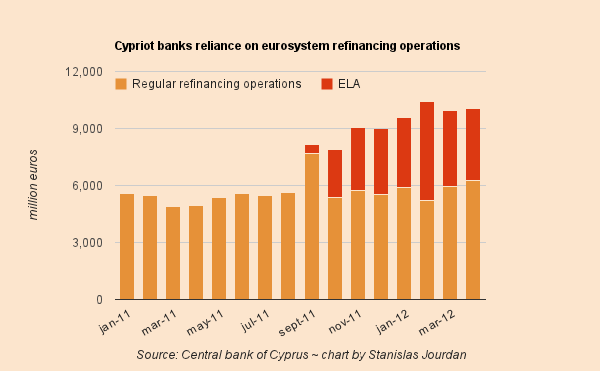 As always, the tricky question here is: are the cypriot banks illiquid or insolvent ?

One year ago, asked by Reuters whether the cypriot banking sector could be affected by a Greece default, Athanasios Orphanides, Governor of the Central Bank of Cyprus replied:

We have examined the situation and we have come to the conclusion that even though there is exposure in our banking system, that exposure is manageable because our banks are very well capitalized.

Sometimes central bankers can be wrong, too.