Another warning signal that the euro crisis is far from over : French banks withdrawed roughly 62 bn euros from the so called PIIGS countries last quarter, Bank for Settlements’ new data release shows.

These two charts will do better than many words: 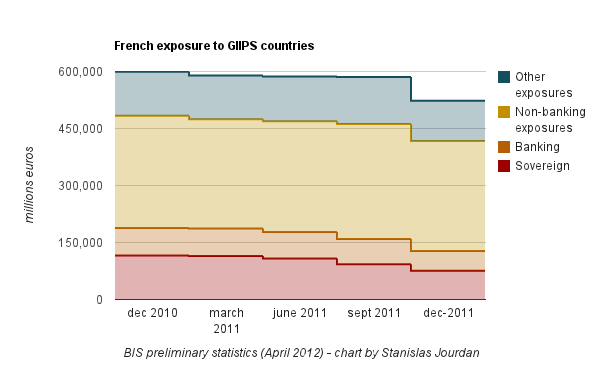 And the second one, which particularly shows a turning point in the cross-border claims vis à vis Italy and Spain: 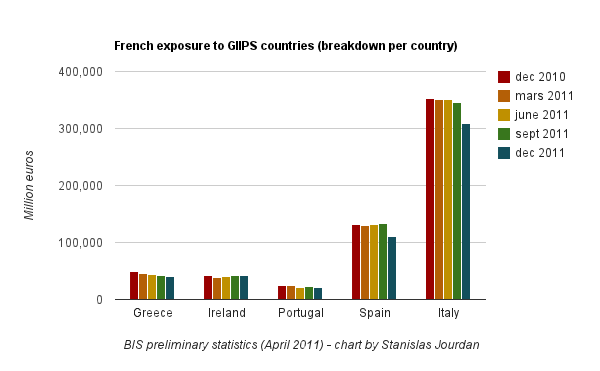 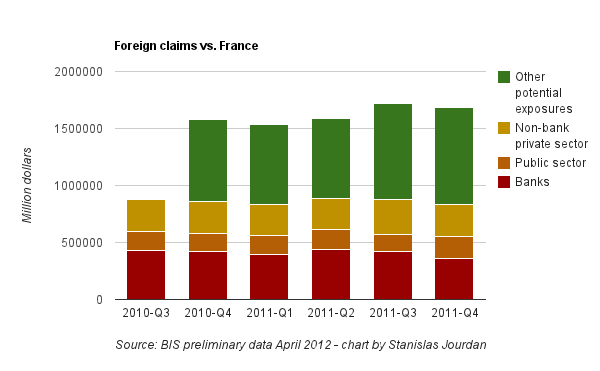 The fall is particularly strong in the banking sector, whose foreign liabilities decreased by 56 bn euros (-13,3%), while sovereign debt owned by foreign institutions increased by 41 bn euros (+27%).

This seems to reflects a global trend last quarter, as the BIS highlights in this report (pdf):

Cross-border claims on residents of developed economies dropped by $626 billion. Claims on banks fell by $499 billion, with the largest declines recorded against banks in Germany, the United Kingdom and the United States. Cross-border claims on non-banks in developed economies decreased by $128 billion, driven mainly by falls in claims against non-banks in France (–$42 billion), the United Kingdom (–$30 billion) and Belgium (–$20 billion). In contrast, claims on non-banks in Japan increased by $51 billion.

These informations confirm that the situation was very critical last quarter, with confidence shrinking towards french banks and on the spanish and italian sovereign debt market. Since then, the ECB decided to inject a lot of liquidity into the markets via its two ‘LTRO’ tenders, that ended with one trillion euros lent to euro area banks.

Where have this money gone? Next BIS data release will be very interesting in this regard.

You can find the BIS datas here