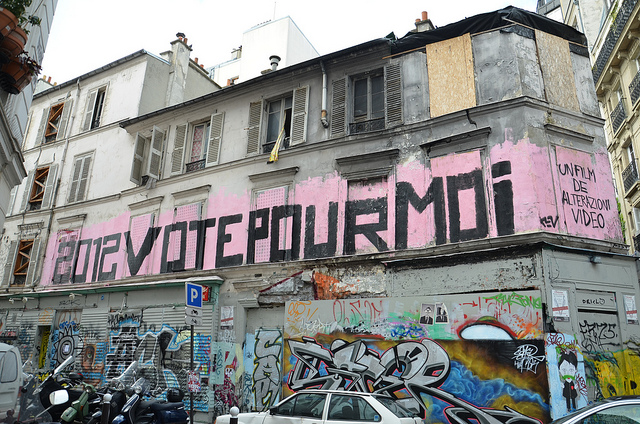 I was not expecting anything from these elections, but still I feel disappointed. No by the results in itself, but rather by the absence of any sort of surprise.

Of course, far-right candidate’s score (17% for Marine Le Pen) is slightly higher than expected, but actually the rise of extremes are a known fact in Europe. So no one should be so surprised.

Of course, two-party system won. Once again. Because of the two-rounds election system, Hollande was able to gather votes by agitating the fear that a move of its vote to Mélenchon or the Greens could have left room to a right-wing second round without any left-wing candidate. A lot of People would not vote for him in a different system, but because we all want Sarkozy to leave the Élysée, it was too much risky to vote massively for another candidate.

As always, Sarkozy is also mobilizing fear. As he has been doing during his campaign, he repeated yesterday that he was THE man who could handle the crisis like he has been doing until here and blablabla. Of course, this is bullshit, but sadly this kind of speech actually works towards conservatives. They are afraid of any change, so they would rather vote for the man they already know than anyone else.

Mélenchon finally seems to be in the system. The left of the left candidate was the only candidate to really drive hope from his supporters. Until here, he always said he would not negotiate anything with the PS. However, he finally appealed for a vote against Sarkozy, thus supporting de facto the PS candidate François Hollande. It appears clearly that his position “against the system” was just a façade: claiming to be against the system and pretending to change it if he was elected is actually just another way to play a part in the system.

What’s next? Immigration, security and halal…

With 20%, the FN voters are now in the center of  the issues. It is still unclear whether FN voters will now support Sarkozy. A lot of them are voting against the system (and against Sarkozy). Some of them will probably report their vote to support Hollande then.

Bayrou’s votes will also be disputed, but the centrist candidate always positioned himself as a strong opponent of Sarkozy. Except one specific part of his group of voters (who are traditionally conservatives), these votes are almost acquired to Hollande’s cause.

So, Sarkozy seems in a weak position, and will do everything he can to seduce FN voters in order to be reelected. Which guarantee us a lot of Halal meat, immigration and security issues in the coming debates…

Again, without any surprise…

All in all, I am surprised by the lack of surprise. Again, two-party system won. Again, People are giving legitimacy to the ruling elite. Again, extremes are getting credit for the lack of relevant answers from the mainstream politics. Again, the ones that pretend to promote real alternatives finally chicken out.

People do not deserve so much mediocrity. When I talk to my fellow citizens, it appears clearly they do want change and are searching for alternative ideas. But most of them are distraught. They don’t know where to start from to understand the system, neither where to look for the alternatives and how to promote them. Others are getting more and more impatient and angrier and say we should not wait for having the ideas before protesting.

This sort of democracy is getting boring. It’s like the whole machine keeps on working out and nothing can stop it. How long will it last? It seems we have to work much harder than I thought.